February 6, 2020 In Uncategorized By Livingston

Livingston wouldn’t exist today if it wasn’t for Dr. Hair. 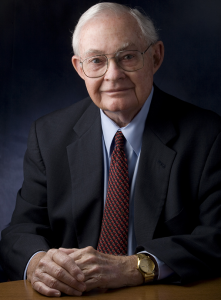 Few people have affected Ventura County more positively that Dr. Charles M. Hair. To get him to talk about his accomplishments was difficult, though. He was a humble man with a good sense of humor and a genuine concern for people. When you did get him talking, though, he could tell wonderful stories.

When he tells the story about how Livingston Memorial Visiting Nurse Association came to be, he talks about three big pivots. At the time, Dr. Hair had a thriving practice as a family physician. He did everything for hos patients, from tonsillectomies to delivering over 3,000 babes, including Livingston Board Member Tom Pecht.

One of his first patients was Dr. William R. Livingston, a local physician and proponent of the “Twilight Sleep” method of delivering babies. Dr. Hair cared for both Dr. Livingston and his wife, Ruth Daily Livingston. At the time, of Ruth Livingston death, Dr. Hair discovered she named him in her will to be the executor of her estate.

As he said, “Out of the blue,” he was in charge of a substantial legacy. That was the first pivot. Ruth Livingston wanted her estate used to fund a hospital in Saticoy. Dr. Hair recognized there wasn’t any need for a Saticoy hospital which led to the second pivot.

He consulted with Ben Nordman, Esq. and together they led the effort to found the Livingston Memorial Foundation and then the Board of the Foundation began looking for alternative healthcare opportunities. As Dr. Hair put it, he saw hospital patients “leaving sicker and quicker.” He recognized the County had a greater need for services to help sick people stay in their homes to heal. The Foundation Board reached out to the Ventura Visiting Nurse Association. In time, the Ventura Visiting Nurses became Livingston Memorial Visiting Nurse Association. Livingston has been filling the need for home healthcare for the past 76 years.

There was one more pivot to come. Dr. Hair had read about hospice care. The idea intrigued him. On a trip to England, he visited two nuns running hospice care. He became convinced of its value to patients. When he returned to Ventura County, he was a big supporter of adding hospice care to Livingston’s services.

Rarely does one person impact Ventura County as much as Dr. Hair did. Livingston, as we know it today, wouldn’t exist without the genial, affable Charles Hair. He touched the lives of countless Ventura County residents, both directly and indirectly. He helped make the world a better place, and we’re grateful for that. Dr. Charles M. Hair.